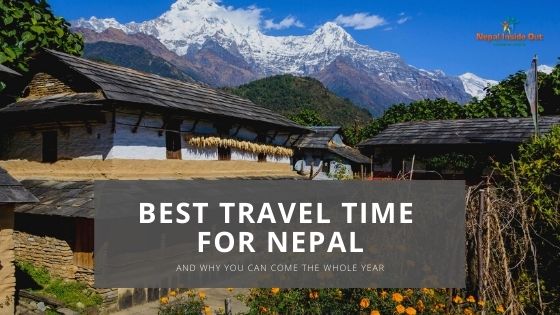 Often we are asked about the best travel time for Nepal. The nice thing about Nepal is that you can travel there in all seasons. In terms of seasons, Nepal is comparable to Europe, with a monsoon period in the summer.  Nepal also has a wide variety of climates. You should also take this into account when putting together your wardrobe.

Not all periods are equally popular: most people travel in Nepal in autumn or spring. Then comes the winter and finally the summer. A lot has to do with the view on the mountains, because a tour in Nepal is possible all year round.

Travelling in a less popular period has a number of advantages for you:
– it is less crowded everywhere
– beautiful green nature (monsoon) or snow (winter)
– can be a little cheaper
– is a lot more authentic

With the information you will find here, you can choose the most suitable time for your individual trip to Nepal.

This is the favorite period of many for a trip in Nepal and thus immediately the main season in Nepal. The weather is nice and the temperature pleasant. The monsoon washed away all the dust, so the country is nice and green.

The advantage of trekking this season is the great chance of blue skies with endless panoramic views of the snowy peaks of the Himalayas. A short storm can bring a considerable amount of snow at high altitude, especially towards the end of autumn.

Round trips in autumn

This is a very suitable period for a roundtrip, which you can possibly combine with a trekking of your choice.

In general it is dry and sunny in winter. The Kathmandu valley has a temperate climate. In winter, temperatures drop to just above freezing at night; during the day it is mild and the air is usually clear. In Pokhara the climate is similar to Kathmandu, but the temperature there is always slightly higher. In the south of Nepal there is a subtropical climate: in winter it is pleasantly warm. In the Himalaya Mountains it cools down considerably in the evening and it is really cold at night. Of course a lot depends on how high you go into the mountains. In the high mountains (above 4000 m), it freezes at night and sometimes snows. There are also strong winds in the mountains.

In some regions it snows a lot in winter. For treks at higher altitudes where you have to cross one or more passes, you may have to return on your footsteps because the pass has snowed. You may also need crampons on the paths. A trekking at high altitude in winter is therefore for the real go-getters, who like to walk in the snow. Treks at lower altitudes and around the Kathmandu valley are perfectly doable in winter.

Round trips in Winter

A round trip in winter is definitely recommended, even in combination with a (short) trekking at a relatively low altitude. During the day it is sunny and pleasantly warm, at night it cools down a bit. It is quite quiet everywhere, you won’t meet many other travellers.

Spring is the second main season in Nepal. The days are a bit longer and it is pleasantly warm at lower altitudes. On different paths you can enjoy beautiful flowering rhododendrons and other beautiful wild flora in bloom. In the Himalayas there is a moderate temperature at altitudes above 4000 m. At night it is still freezing.

During this period a trekking is possible in every region of Nepal. It is a bit quieter on the trekking paths than in autumn: there are fewer trekkers. It may rain (pre-monsoon), often in the late afternoon, but in the morning you usually have clear mountain views.

Round trips in Spring

This is a very suitable period for a nice round trip, which you can possibly combine with a trekking of your choice.

In the Kathmandu valley it is humid during the day (average 28 degrees) and it often rains in the afternoon. In the morning the weather is usually sunny or at least dry.

In Pokhara it rains a bit more than in Kathmandu and the temperature is also a bit higher.

In the South of Nepal it is oppressively warm (>35 degrees) during the monsoon. A rainstorm is a pleasant cooling surprise. There is air conditioning in the rooms and during the day you can do custom activities in the national parks.

In the Himalayas, due to heavy rainfall, a number of treks are less pleasant and unsafe: landslides can take place.

There are several treks that are safe during the monsoon, such as the lake and paths in the Annapurna and Langtang area. These can also be easily included in a round trip. Just keep in mind that the paths are a slippery and that there are some leeches in dense forested areas. Nature is amazingly green and some magic happens when the clouds open up and some snowy Himalayan peaks reveal themselves!

In some regions there is also less precipitation than elsewhere, such as Jomsom or the Lower Mustang region.  In addition, there are also regions in the rain shadow of the Himalayas, and therefore very suitable for the summer period. Such as the Mustang region, the Dolpo region, the Limi Valley and the Nar Phu Valley.

Round trips in Summer

A round trip whether or not in combination with a short trekking is certainly possible in Summer. If you take into account that it can rain a lot and don’t have a problem with the humid heat, this is a fascinating time to travel around Nepal.

If you want more information about the weather and whether the trip you have in mind is suitable for this period, please feel free to ask us for advice. 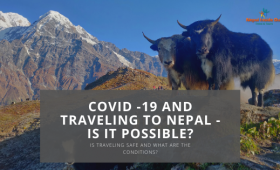 Can you travel to Nepal during corona pandemic? 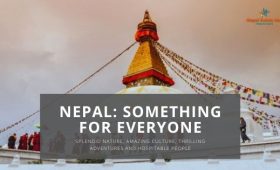 What to do in Nepal: something for everyone 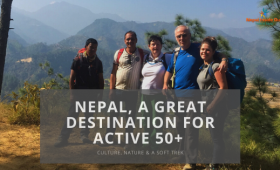 Nepal, a great destination for active over fifty’s!